Motel – Images Of Australia On Holidays 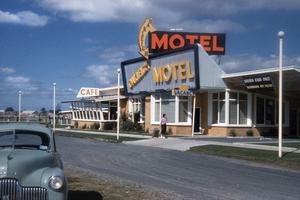 Motel – Images Of Australia On Holidays

Motel captures the heyday of Australia’s motels via a deep trawl through the National Archives of Australia, presenting a fascinating pictorial history of Australians on holidays between 1950 and 1989.

If any country was born to holiday, it’s Australia.

Sun, space, beaches – the desire to hit the road and “get out of town” remains a strong and enduring part of our cultural identity. Many of us remember the summer ritual of packing up the car with half the stuff we owned and heading for our chosen “spot” in often incident-packed road trips.

Central to those memorable journeys was the motel. “We’ll stay a night in Gundagai,” Dad would say, to break up the trip. Discovering the configuration of a new motel was all part of the holiday adventure – did it have a colour TV? The little packs of cereal? A couple of complimentary Arrowroots to go with the free tea and coffee? Bricks on the inside as well as the out?

In his new book Motel, Tim Ross captures the heyday of Australia’s motels via a deep trawl through the National Archives, presenting a fascinating slideshow of Australians on holidays between 1950 and 1989.

A pictorial love letter to a somewhat bygone era, it captures the accessible glamour and car-friendly convenience of the road-side motel, from Gold Coast ‘palaces’ to out-of-the-way comfort stops (some with attached restaurant! Dinner: 6.30-8pm).

Motel is an affectionate tribute to one of this country’s greatest democratic institutions. From Prime Ministers to punters, at some stage we’ve all had to lay our head down at a welcoming motel as the sun sets on the highway.